Karesz Vandor is a Budapest-based Hungarian Jewish tour guide who is officially licensed in English and Hebrew. His tours cover Budapest’s iconic places and the highlights of the the countryside. He creates his Hungarian Jewish tours with a focus on Jewish heritage in what was once the Kingdom of Hungary. His extensive experience and expertise also include researching Hungarian roots as well. This service, for instance, helps clients locate family documents and relatives. He also partners with the best experts who know how to choose accommodations in Budapest.

He was born in Eastern Hungary during the previous regime, which influenced his interest in general and Hungarian history. This is where he grew his passion for learning more about the life of Hungarian Jews. He is also the founding member of the Tiszafüred Menorah Foundation which is a organization promoting Hungarian Jewish genealogy and preserving the Jewish heritage of Tiszafüred. His thirst for knowledge and his eagerness to help, in addition, is what led him to becoming a tour guide.

You try to avoid the boring generic tours? Looking for a more personalized experience? You want to learn the details about Jewish Budapest and the entire country’s Judaic history from a local Jewish tour guide?

Karesz costumizes each of his Hungarian Jewish tours to fit the personal interests, backgrounds and needs of clients. Therefore, his ultimate goal is to provide visitors a truly unique experience. He truly believes it is the key element to a first-class travel adventure. 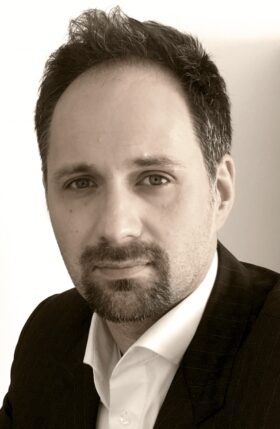 You can contact Karesz directly for a customized Hungarian Jewish tour by a local Jewish guide. In addition to speaking the intricate native Hungarian language,  he is also fluent in English, Russian and speaks Hebrew, German and Yiddish as well.

Hungary is filled with a vast amount of history that connects to Jewish heritage and tours can be tailored to a visitor’s specific needs and interests; for example, if you request a tour of the countryside, a plan can be created together with Karesz or he can provide suggestions leaving you with nothing to do but show up. His services are flexible and are tailored to your needs: he as your local Jewish tour guide, can also suggest a list of places of Jewish interest that most guides would not take you to.

Visiting the graves famous tzaddikim is an old Jewish tradition. Tens of thousands of pilgrims come to Hungary every year to pray by the graves of the much-respected rebbes. Whether it’s visiting the tomb of Reb Yitzhak Eizik Taub of Nagykálló or those of the Yismach Moshe or the Chasam Sofer or seeing the beautifully restored Mád synagogue, we can complete your trip with an authentic Jewish Hungarian experience. 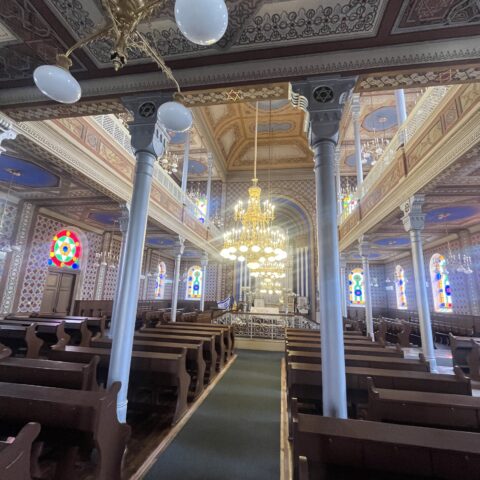 Budapest is among the most beautiful capitals in Europe and is home to the largest Jewish community in Central-Eastern Europe. You can get the most out of your stay with a Budapest Jewish guide if you want to truly explore and experience Budapest’s rich Jewish culture.
Despite the city’s relatively small geography, its population has always been and still is a diverse mix of religions and ethnicities. Its streets are filled with elaborate architecture that is truly unique. Be it energetic Pest or hilly Buda, Hungarian Jews have played an important role in creating what is now Budapest.

In this package of the Budapest Jewish guide, We offer a brief, half-day tour. The tour that is about four hours long focuses on Jewish highlights of Budapest,  not to be missed. The Essence Tour includes three synagogues built in Moorish and Art Noveau styles, moving memorials and hidden treasures that mark a path in the heart of what is known as the ‘Jewish quarter’. Also, you will learn a lot about the country’s general history and the story of Hungarian Jews until today.

If you prefer to see a bit more, Our Budapest Jewish guide will introduce you to Budapest’s contemporary Jewish life. With a full-day of  intriguing historical background that will include a stop in the Jewish quarter at a kosher butcher and deli. Or a Hungarian restaurant serving Jewish cuisine but notwithstanding a sweet treat at the only kosher confectioner in the city. The day will also include a visit to the Royal Castle at the Buda side of this marvelous city. The castle hill complex houses the oldest medieval study house (Beith HaMidrash) and a mikveh. 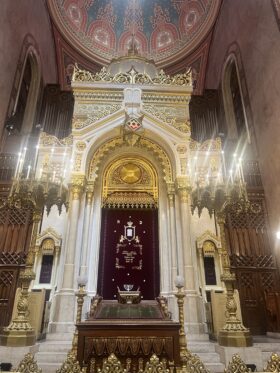 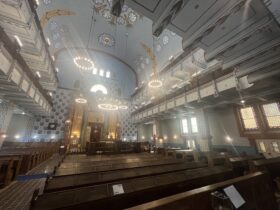 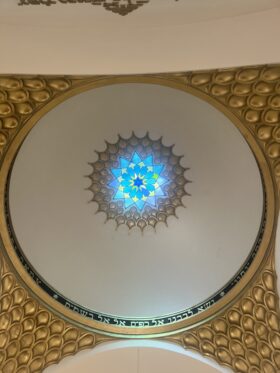 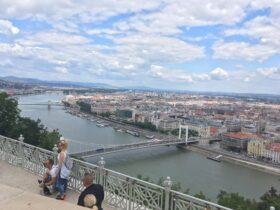 It was my second time to Budapest, but Karesz showed us a side of the city I didn’t think even existed anymore…there is a thriving Jewish presence that made me feel even more connected to my father’s roots. He also helped coordinate a special ceremony for me and my husband’s new marriage in the very synagogue where my father was Bar Mitzvah’d and his parent’s were married. It was the best experience of my life.

We visited historic sites, spending time in the Jewish Quarters while enjoying the best Israeli-style falafels at a hip small chain restaurant as well as delicious authentic Hungarian treats at a legendary kosher bakery.

Karesz is such an incredible resource with a wealth of historical knowledge (about all things). He is also a sincere, passionate human being and who really made the tour so personable. We are incredibly grateful giving us such a memorable experience.

Karesz is an engaging informative guide who will go out of his way to make your trip memorable for you. Whatever you want to see or if you don't know what you should see, he is your man. We traveled with Karesz for one week in April 2016 and although our itinerary was extensive and researched by us, he refined it and we were very pleased with his great suggestions. Very professional, thorough and reliable. Bonus points for his genealogy skills! He truly made our trip to Budapest very meaningful!

I can't recommend Karesz enough. My wife and I planned a trip that included seeing the ancestral hometowns of my great grandparents in rural eastern Hungary. We had hoped to meet with people who could tell us stories about our family and learn about their lives and our Jewish history from before World War II. We knew it would be a challenge just to find these towns, much less bridge the language barriers, which is why we contacted Karesz. This was a very a once in a lifetime opportunity and we put it in Karesz's hands. I am very glad we did so.

He has incredibly deep knowledge of Jewish and Hungarian history, great rapport with these communities, very strong translation skills (Hungarian, Hebrew, Yiddish, and English), and a real ability to make magic moments happen that you can't plan for. We spent time searching abandoned Jewish cemeteries to unravel clues, hearing stories from women at a senior center, and spending an afternoon with the oldest man in another town who fought in the war and had memories of my family.

It was a really amazing day that would not have been possible without Karesz.

Karesz, Just a quick thank you for a wonderful (very cold) day in the Jewish Quarter. We returned for lunch a few days later at the kosher restaurant connected to the synagogue you recommended. The rest of of stay in Budapest was incredible. Our kids loved it and we took in much of the city. I appreciate the time we had with you.

It had always been my dream to visit the cities that my Hungarian ancestors came from. Walk the streets, visit the Synagogues they prayed and were married in, find their graves and be able to identify earlier generation.
Thanks to Karesz and Hungarian Jewish tours/Hungarian roots the dream became a reality. Karesz did advance work for us months before our arrival, locating birth and marriage records of my family. After we arrived in Budapest Karesz picked my wife and I up at our apartments and drove us to the town where my family lived. We first met with the county clerk who Karesz convinced to search the death records and found the information about my GG grandfather and our next stop was the Synagogue which of course was closed as was the cemetery. But Karesz was undeterred and managed to call people to open up the Synagogue and cemetery and we were successful in finding my relatives there. The caretaker of the Synagogue was even familiar with my family name and knew of the last person taking care of their graves.
Using the information obtained from the town clerk Karesz was able to find out more about my family, obtaining additional records of their passing and even changing their name. My sister and her husband joined us a few days later and Karesz took us on a wonderful tour of Jewish Budapest and the rest of the city as well. My wife and I will never forget this trip and our wonderful guide.

Karesz was an amazing tour guide. He really made the difference to our trip. I can't recommend him highly enough. His knowledge was very impressive and tailor-made perfectly for our group.

Words can not express how deeply grateful we are for the incredible support of Karesz. We would never have been able to achieve what we have without Karesz’s extraordinary insight, expertise and passion for finding forgotten family history. He was of absolutely critical assistance both in terms of identifying vital records and in the field research that allowed us to build our family tree and to deepen the knowledge of our family’s Hungarian and Slovakian history. We saw things and spoke with people that would have been impossible without him and his expert knowledge.

Meeting Karesz was the highlight of our trip to Hungary. He is intelligent, enthusiastic and extremely knowledgeable about all aspects of Jewish Hungarian roots. It was my first trip to Hungary, which was specially meaningful to me as I wanted to experience the city with an in-depth understanding of how my father had lived there during the WWII years.

Karesz expertly located a whole branch of my husbands’s side of the family who had died before the war, all of whom were unknown to us. The birth, marriage and death certificates that he produced confirmed their names and existence for us, and Karesz was able to fill in the gaps about various family relationships that we could never have figured out alone, even with correct translations.

He took us on a lively tour of the Jewish section of Budapest, and pointed out landmarks of interest such as the huge mural relief with a map of the ghetto, and visits to a few different synagogues and Jewish landmarks, with relevant anecdotes and personalised information. He also showed us one of the trendy ruin pubs on the way out and really made us feel welcome in the city. 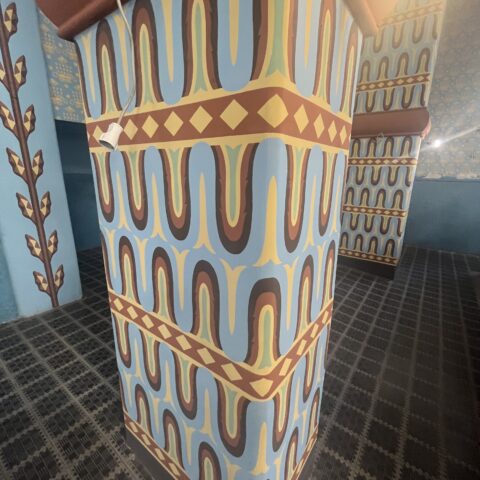 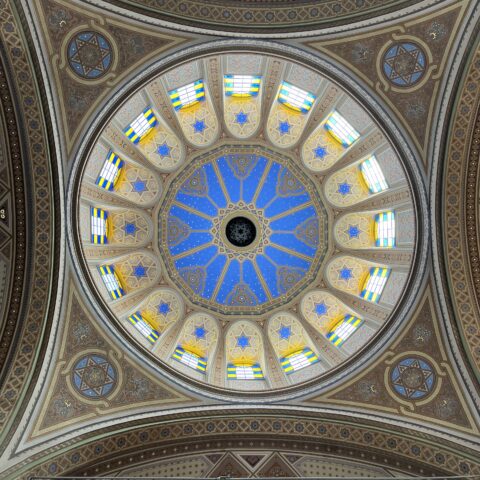 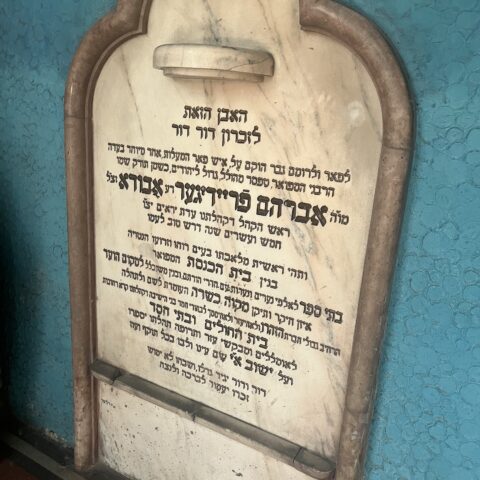 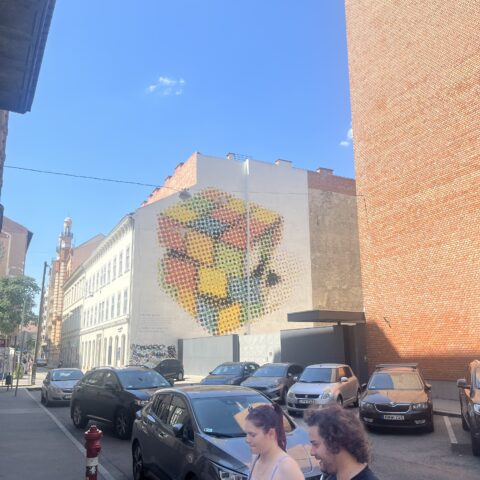 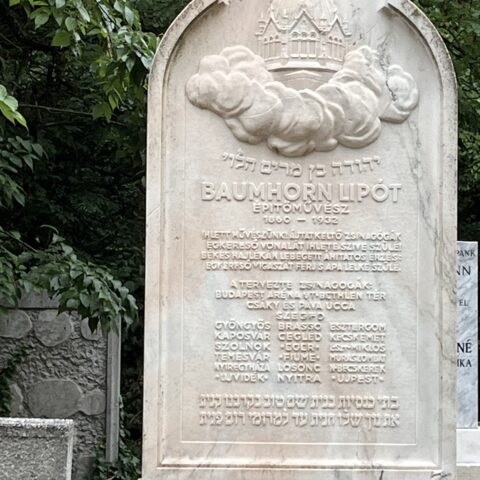 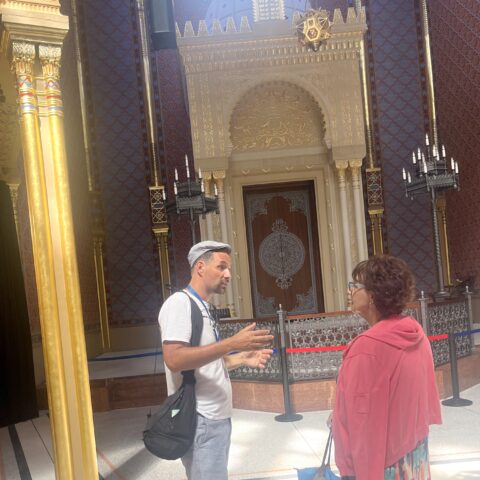 Should you have questions or would like to know more about our Hungarian Jewish tours, our Budapest Jewish guide tours please use the form below to contact us. You may also write us at info@hungarianjewishtours.com or call us at +36-30-546-6950. For genealogical research, please use the Hungarian Roots website. 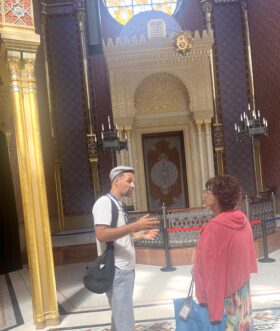